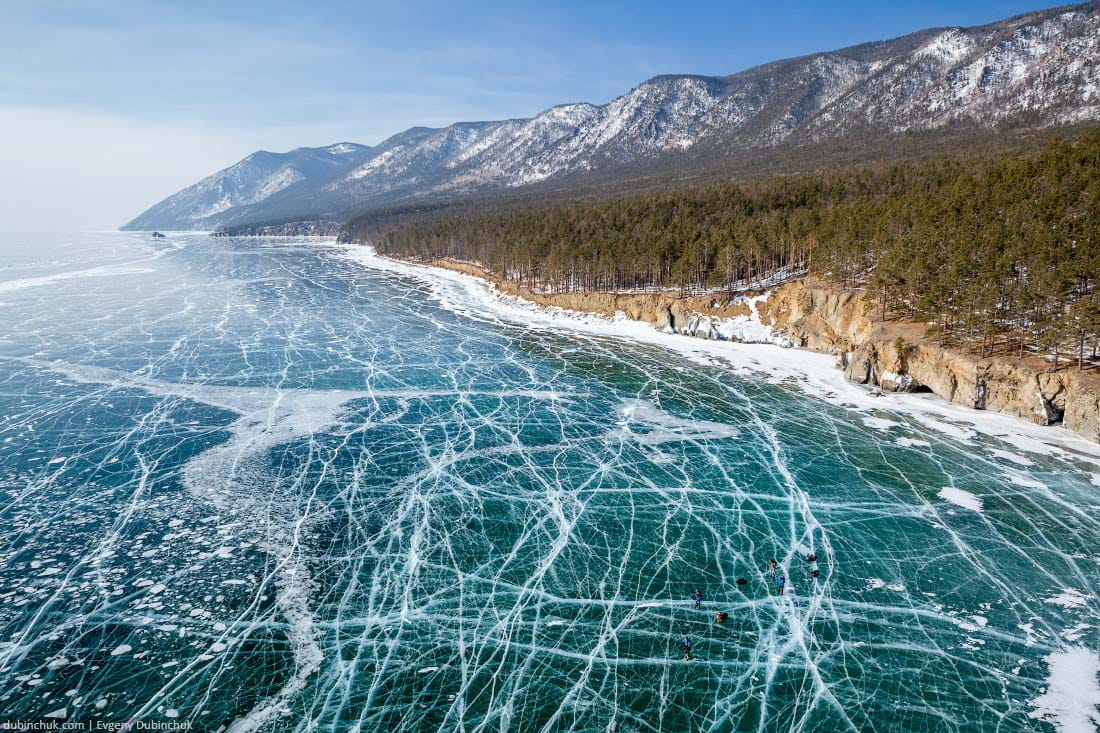 About Lake Baikal in winter

Lake Baikal in winter is a true wonder of nature! A truly unique place that can not be compared with anything else: hundreds of kilometers of pure smooth ice covered with cracks like ice cobwebs; hummocks, high mountains above the lake …

No doubt, this is the largest and most beautiful skating rink in the world! Don’t believe? Take a look at photos!

When you step on the ice, through which you can see the bottom at a depth of more than 10 meters, the sensations are just incredible – as if you are going out into outer space! It feels like there is nothing under your feet, you are standing on the ice, and under you is an abyss. All around you hear crash, gurgling, the sounds of strikes of huge ice blocks against each other. Baikal seems to be talking, it wants to tell it’s secrets, to show it’s power and greatness, which it gained over millions of years of life. Baikal is bursting, gurgling, as if its heart is beating, driving blood through the arteries …

Baikal is a place that will not leave anyone indifferent!

Want to make sure? Join the unusual journey on Baikal on skates and feel its unique energy!

How to join the trip?

Follow the links above for details about the conditions of participation, find out what equipment you need to take with you, where to find nordic skates, see photos and videos from past trips.

The routes are based on three trips and more than 1000 kilometers of skating on the lake.

Preparing a tour is a creative process, and each route will be made with big love, so that you can see only the most interesting and get a lot of positive impressions!

I don't have nordic skates

You can buy skates (starting from 100 euro) or rent them for 7 euro per day.

Do not worry, with well-chosen equipment you will feel quite comfortable

I'm afraid to fall through the ice

The probability of this is extremely low, if you follow the security measures: do not come close to cracks without the permission of the guide, do not move ahead. The ice itself is up to 50-100 cm thick, in February it is slightly less.

Why is there no snow on Baikal?

The wind on Baikal is predominantly west and north-west, and it is quite strong, so the snow blows to the eastern shore.

When is the best time for the trip - February or March?

In late February – early March it can be quite cold, but ice is the most transparent at this time, and there is a greater chance that there will be no snow. By the middle of March it is getting warmer, but at temperatures above zero in the bright sun the ice may cloud. But at this time of year, Baikal most of all “talks” – it gurgles, rumbles. In the second half of March, the ice is usually faster It is worth expecting temperatures up to -10 … -15 in the afternoon and up to -30 degrees Celsium at night (this is rare, but you need to be ready), by mid-March the thermometer can rise above zero. We offer three routes. The choice is yours!

Which route to choose - around Olkhon or from Bolshoe Goloustnoe to Olkhon?

Good question! From Bolshoe Goloustnoe to Olkhon, as well as the eastern coast of Olkhon, these are mostly wild places where people are met not so often. The most beautiful place within the routes, in the opinion of the guide, is Peschanaya Bay, not far from Bolshoe Goloustnoe. The Maloe More Strait (the western part of Olkhon) is rich in islands, sokui (ice splashes), grottoes. Also on the route is the village Khuzhir, in which the famous Cape Burkhan is located.